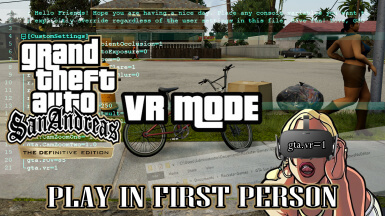 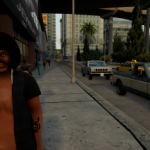 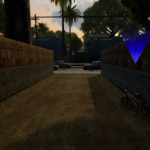 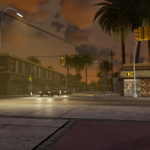 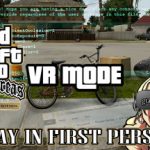 I have been searching for a way to get the new DE version of San Andreas in a first person camera view or waiting to find a mod made by a skilled Unreal modder and coder… but it has yet to be done.
Fortunately myself and others (over at GTAForums) have discovered the CustomSettings.ini’s included with the Save folders on PC, have room for Unreal Engine Console Variables. To quote Grove Street Games in the ini files:

Hello Friends! Hope you are having a nice day. Place any console variables you want to explicitly override regardless of the user settings in this file. Have fun! Love, GSG

Here is how players can get a rudimentary First Person camera in San Andreas Definitive Edition, V(this camera does not work while aiming guns, only while waking around on foot)

For now I have taken the liberty of including a file that contains the VR mode enabled by default with some minor tweaks to camera distances and small graphical improvements.
This is just one example of how the CustomSettings.ini file is intended to aide in modding of GTA SA DE and the DE Trilogy titles.

I was excited to make this discovery and wanted to share with others, I hope a list of the variables the game contains comes out soon and more fun modding can be done this way!

Until then enjoy this simple VR view mode tweak!